10 am on  Tuesday the 29th May so much later than in previous years we leave the port of Roanne and enjoy slowly making our way down the canal – its a short cruise of 15 kilometres with 3 locks buts its good to be on the move.

We moor at Briennon where the supermarket appears to have permanently closed but the boulangerie  is open and we cannot resist a couple of cakes. The only excursion is a short 3 mile run along the canal.

Wednesday we travel the same distance without any locks today and moor in a pretty inlet at Artaix. It is fortuitous that we decide on an early start on Thursday morning as the guys with the lawn mowers turn up just as we release the ropes and theres nothing worse than having our boat covered in grass cuttings.

The only other boat seeing us leave quickly follows suit and shares a few locks with us. We also descend the Bourge le Compte lock which is one of the largest locks on the French canal system at 7.2 meters. We are happy to see the quay at Croix Rouge is empty and moor up at the same time as large barge Aurigny but have to juggle about a bit to get both boats in as it is pretty shallow in places. After a four mile run we join Peter and Nicci on Aurigny for a drink or two or three…… forgoing dinner we enjoy sharing their cheese platter. It is great getting to know them and have a lovely evening.

June already and we wake up on the 1st with slightly sore heads, my cure of fried egg sandwiches is a must before we set off  for the last three locks saying goodbye to the Canal de Roanne à Digoin as we turn left onto the Canal latéral à la Loire. This canal is 200 km in length from Digoin to Briare with only 47 locks all operated by a lock keepers. The first lock is closed for lunch so we moor up only to watch a large barge (with English Flag) pass us clearly thinking the lock is open. The sole traveller appears not amused when he learns it isn’t and not bothering to moor up allows his barge to basically block the canal.

A hire boat turns up thinking there is a problem. Promptly at 1pm the lock opens with  our guy thinking he has priority but as you can imagine Charles has other ideas and makes his presence known. We, as can be expected, enter the lock first closely followed by the 18 meter barge but due to the positioning of the bollards we cannot move forward to allow sufficient room for both boats so he reluctantly backs out allowing the hire boat in. Travelling 20 kilometers with 5 locks we stop at Pont de Pierrefitte. Its a very long quay but we have it to ourselves along with some fishermen who camp out nearby.Behind the mooring and a high bank is a lake for fishing, swimming and sailing so we get the bikes out to ride around and then continue up the canal to Diou – a 10 mile round trip for a baguette but it is a lovely warm evening and a very pleasant cycle. Sitting on the back deck we watch as one of the fisherman pulls (not sure of the technical term) a large fish out of the water, weighs and photographs it before it is thrown back it.

On Saturday we travel 17 kilometers with 5 locks. We can see that the lock at Bressais is being kept open for us so we hurry up to join a hire boat already waiting. It would only happen in French but as one lock keeper starts to close the gates the other ones looks at his watch and say its lunch time and leaves us in the lock as he walks away. We get talking to the couple on the hire boat who are from New Zealand; Mike and Bernice (I think) who are admiring our boat so we invite them onboard for a look around as we wait the hour before we can move off.

We moor at Beaulon and are soon joined by Kevin and Debbie on Rangali. We all walk into the village and after a game of petanque which becomes competitive enough for me to get a tape measure to ensure a fair outcome – and of course the girls win…. we share a bbq and probably too much wine.

On Sunday after my morning run Charles and I cycle to Bourbon Lancy 7.5 miles away. It is a spa town apparently although we didn’t see any evidence of that but we did have a steep climb to the centre.

It is very pretty and we decide to stay for our Sunday lunch before freewheeling back down the hill and back to the boat.

In the morning (Monday 4th) we say goodbye again and travel 14 kilometers with 3 locks to Vanneaux (Gannay sur Loire). It is such a lovely mooring with table tennis and a small childrens play area and also a cafe/restaurant. On Tuesday we are once again joined by Debbie and Kevin just in time for lunch but as we leave the boats to walk to the cafe we see the owner drive off clearly deciding she wasn’t going to get any customers. Instead we walk into Gannay for lunch at La Sully. Debbie and I order the goats cheese starter but Kevin is told by the waitress that he cannot have it so we assume there are only two left. But 10 minutes later when more customers arrive we see them being served the cheese – another example of French quirkiness. 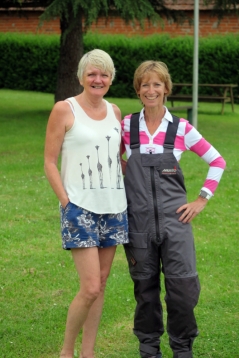 Me and my mate!

As Charles and I play table tennis we receive excellent service from our neighbours as Kev brings across refreshments – not Robinsons juice as served at Wimbledon but glasses of Crement with ice and pineapple.  That sets the tone and three bottles later – well we really are saying goodbye in the morning and don’t know when we’ll all catch up again.

So we are on our third goodbye as we leave the port on Wednesday morning (6th) – to be honest whilst the French will be pleased with the amount of booze we share our health really needs us to have some time apart. With five locks to complete our trip on this canal we turn up at Decize just at 12 and find the automatic lock closed. As we moor up Charles takes a tumble as his rope slips off the bollard and falls backwards into the wheelhouse – better than the canal but apart from some bruising all is well and no-one saw it happen – and no-one would be the wiser if I hadn’t announced it here!!