Oh Dear……one thing after another!!!

10th April. Our excitement about our forthcoming cruising season doesn’t last too long as problems occur one after the other. Nothing major but enough to dampen the spirits….

While we were back in the UK, Carcassonne suffered a sudden extreme storm which ripped our sun canopy from from its fixing resulting it flying backwards over the wheelhouse. 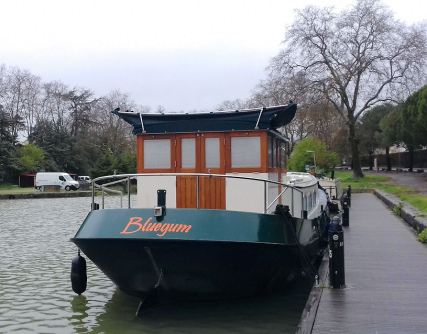 Fortunately in our absence Simon Piper had arrived that morning so secured it down for us – and after he had finished it wasn’t going anywhere. (Apparently Simon said to Stephanie (the port capitain) that he hadn’t seen a canopy stored like that before – until she pointed out that it hadn’t been like that yesterday!) So our first job is to inspect the damage and are pleased there are only a couple of small rips which can easily be repaired. 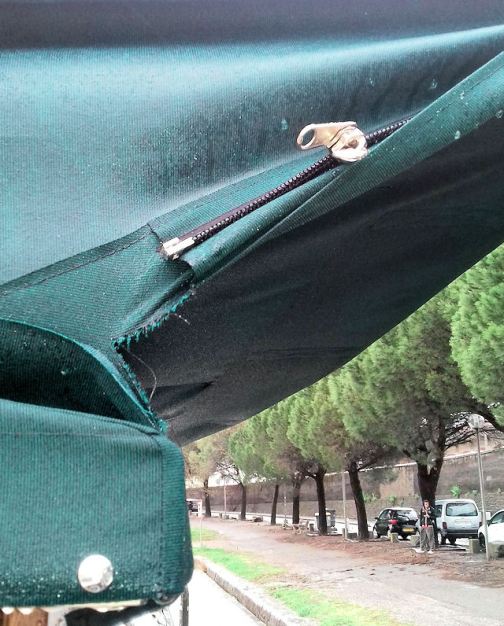 First the toilet won’t flush and there is only so long one can cross ones legs!!! And then I notice brown staining on the wood under the gunnel and behind the television. Now we knew we had some staining but thought it had been sorted when Charles applied some Captain Tolley’s Creeping Crack Cure – but this is something else and I am not happy and neither of us have any idea what to do about it.

I am a wee bit worried that I may be responsible for this but sometimes its best keeping thoughts to yourself – on our last visit I may have been over enthusiastic with the new Karcher power wash which did work wonders and took lots of grit and dirt away from the window panels……just saying  quietly it may have been me but I actually think it’s the creaping crack cure thats got into all the nooks and crannies because then it cannot be my fault can it?

So back to the loo…. later in the evening while we are watching TV and avoiding eye contact with the wooden panel Charles decides to try flushing the loo again. This time all the lights and TV go out….. I let out an expletive but for some reason Charles is happier about it as he diagnosed the problem to be a fuse or loose connection and now that’s one thing we don’t have to worry about and can uncross our legs at last……..

So the big day arrives on Tuesday 12th April – after buying essentials and paying our mooring fees we set off in the direction of Toulouse and get about two kilometers when the engine stops and we are dead in the water…… thank goodness we are on a canal and not a river plus fortunately there are no other boats in the vicinity. Charles poles the boat to the towpath and I am able to jump off the bow onto the bank and rope us in.  The mechanic who had recently completed our service soon comes out and finds a loose fitting which initially  thought had sorted the problem but now we are still experiences some problems with the engine. Without further incident we moor at Villesquelande which is one of our favourite places, quite remote, very pretty with a short walk into the village. Then its on to Bram for our next mooring before arriving in Castelnaudary on Friday 14th April for the weekend. Its great meeting up with Maggie, Ni, Pam and Charles again and in the evening all go to a local bar for a ‘Fromage du Goumond”.  We each take our favourite cheese and after lots of tasting one of them is voted the best by each of us placing a sticker on the one we liked the best. Now it would have been helpful if I had noted which one won but it was very nice. We took Epoisse which came a close second but that may have been due to Leigh overdoing the stickers in our favour.

On Easter Sunday virtually every boater from the Port is invited to Maggie and Ni’s for drinks and nibbles during the afternoon which inevitable lasts longer and we end up ordering take away pizza’s for the evening.

We have a great time and meet some new friends including Leigh and Kristie on Le Kaighoni.