How the days merge into one……

Monday the 8th September arrives so we decide it is time to move off again – actually its not the day that makes us move off but the fact that  our cupboards are bare and we cannot live by baguette alone…… We are now covering the last 16 kilometres of the Canal du Nivernais and it certainly won’t be the last time we visit – we think the constant sunshine has enhanced the experience but the variety of scenery during the 174 kilometers and even the 110 locks have been enjoyable together with the cheerful eclusiers (well most of them anyway) not to mention all the other lovely boaters we have met on the way.  We are rewarded with not one but two large supermarkets after we descend the penultimate lock where we fill our trolley with lots of goodies – Charles takes it upon himself to steal the trolley again to save us carrying our purchases but as an honest ex-cop he does return it or probably more to get his one euro back after all he is a Yorkshireman!!! We leave the Nivernais to join the River Loire where we see a nice mooring before the bridge and decide to moor up for the night rather than go into the Port of Decize. 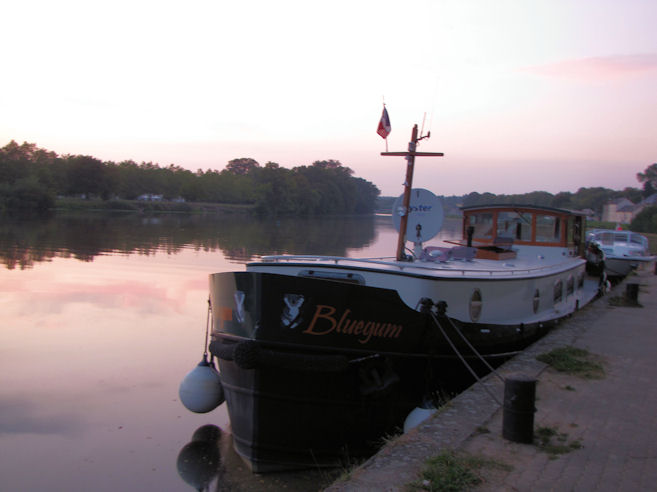 Decize is quite unusual as it is surrounded by two canals; The Nivernais and The Lateral a la Loire and also by The River Loire and The Vieille Loire or Old Loire.  Caesar mentioned this town when it was called Decetia in one of his commentaries ‘when sitting upon the Loire river’. There are some remains of a 12th century castle together with the obligatory churches.

The streets in the heart of the city are very picturesque with cobbled roads and winding paths which provides us with good exercise as some are quite steep. The town is apparently especially proud of its 900 metres walk shaded by plane trees which are nearly sixty metres high.  They are huge trees and it is astonishing to see the power of the wind which has bent them over so they lean uniformly as if bowing to the pedestrians. – think I’m getting poetic in my old age!!

Charles wakes up early on Thursday morning and goes to investigate why the fenders are making so much noise only to find the river has risen about 18 inches and we can see it is flowing very fast.  We don’t have any problem setting off but the force of the current challenges Charles steering skills when he tries to enter the lock only to abort the first attempt when the current tries hard to put us against the lock wall.  He manages to turn us around before successfully entering the lock on the second attempt but not without a good fight and me manning the bow thruster – I do like to play my part in these situations.  There was a beautiful kingfisher sitting on a beam to the side of the lock but I felt it was not the time to go in search of the camera nor do I tell Mr P about it as I think he had his mind on other things – shame it would have been a stunning photo.  We only negotiate the two locks on either side of the Port before we moor above it on The Canal Lateral a la Loire where we join Roger and Glynwen on their Piper barge; ‘Etholle’.  They have had their boat for a few years and they share their experiences with us over a coffee.  After lunch they head north as we head south to moor at The Port des Vanneaux  about one and a half kilometres from Gannay-sur-Loire.

There are couple of English engineers here which seems to attract English boaters as most of the stern flags display the red ensign.  We have to say its rather nice hearing English being spoken and not having to worry about whether we are getting the French right!!! We have a relatively relaxing few days catching up on bits and pieces and taking some nice walks around and about.  We invite Eileen and Martin from their barge ‘Koopmanswelvaren’ and James and Jean on their boat (sorry forgotten the name of their boat) around for early evening drinks and nibbles and enjoy a lovely few hours.

Eileen and Martin return the invitation on Sunday evening and we join them for a few hours – it would seem there is a commonality with many of the British boaters in that couples are frequently on their second marriage and there always seems to be some illness by at least one of them requiring spasmodic returns to the UK for check ups or to replenish medication – I think the other commonality is the maturity with most of us being in the retirement age range but not all as I am an example of one of the exceptions!! As we are preparing to leave on Monday morning we are not only surprised to see a couple of ladies wondering from the hire boat dressed in their pyjamas to a nearby public shower we also see one lady with a towel wrapped around her presumably naked body much to the delight of Martin and Charles who are probably hoping for a gust of wind to happen by…..we decide they must be foreigners as no British woman would be so bold or brave.

We take a leisurely cruise down to the next Halte Nautique – this time at Garnat sur Engievre. Many of the small villages have these little mooring areas – often with an electricity hook up and water and often free or just a few euros for an overnight stay.  I guess they want to encourage people to use the local shops. Most have at least a boulangerie and a boucherie; sometimes an epicerie; the larger ones will have a post office and small supermarket – all have a hairdesser! They also have the oddest opening hours – usually invlolving a lunchtime break from 12 noon to 2 or even 3pm and often closed all day Monday.  We go for a rather long walk through the almost deserted village – it’s quite large actually and 5pm but we only see two ladies chatting on a street corner!

We carry on along the road to the next village and then return along the canal; ending the day watching the antics of a very industrious Coypu and his mate.

Tuesday we take a longer cruise back to Decize and moor outside the port where Sally sets to on cleaning, dusting and polishing before we move into the port and head home on Thursday – can’t be leaving and untidy boat!